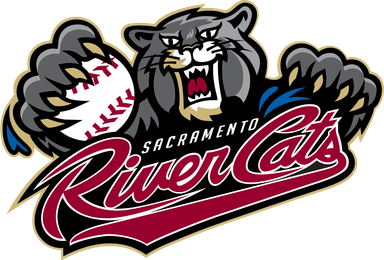 The Sacramento River Cats are a Minor League Baseball team of the Pacific Coast League (PCL) and are the Triple-A affiliate of the San Francisco Giants. Prior to 2015, the River Cats were the Triple-A affiliate of the Oakland Athletics for 15 years. They are based in West Sacramento, California, and play their home games at Sutter Health Park which opened in 2000 and was known as Raley Field through 2019.

The River Cats have won five PCL championships. Recently they won the league crown in 2019; previously they won back-to-back in 2007 and 2008. They went on to win the Triple-A National Championship Game in all three seasons. Sacramento also won the PCL title in 2003 and 2004.

Following the 1999 season, the Pacific Coast League's Vancouver Canadians were purchased by a group led by Art Savage, moved south to West Sacramento, and renamed the River Cats for the 2000 season. Savage was the majority owner of the team until his death at age 58 in November 2009. His widow, Susan Savage, became majority owner after her husband's death.

In 2016, Mike Piazza became the first and only former River Cats player to be inducted into the Baseball Hall of Fame, after earning an 83% vote by the committee. Piazza played three games in Sacramento as part of a 2007 rehab assignment before rejoining the Oakland Athletics.

In conjunction with Major League Baseball's restructuring of Minor League Baseball in 2021, the River Cats were organized into the Triple-A West. They also entered into a new 10-year Professional Development License agreement to remain the Triple-A affiliate of the San Francisco Giants through 2030. Sacramento ended the season in fourth place in the Western Division with a 52–65 record. No playoffs were held to determine a league champion; instead, the team with the best regular-season record was declared the winner. However, 10 games that had been postponed from the start of the season were reinserted into the schedule as a postseason tournament called the Triple-A Final Stretch in which all 30 Triple-A clubs competed for the highest winning percentage. Sacramento finished the tournament tied for 20th place with a 4–6 record. In 2022, the Triple-A West became known as the Pacific Coast League, the name historically used by the regional circuit prior to the 2021 reorganization.

In August 2022, owner Susan Savage sold a majority interest in the team to the Sacramento Kings.