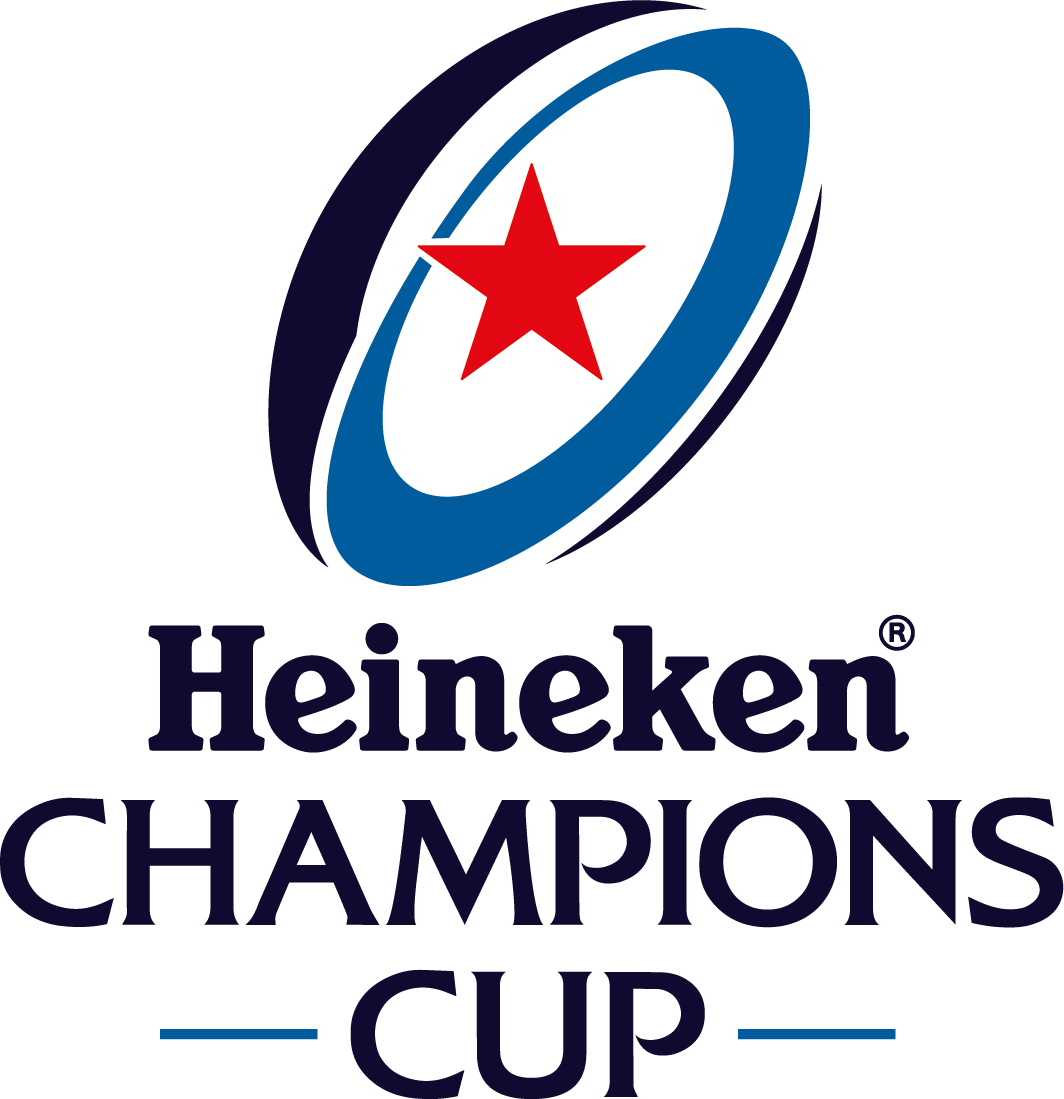 The European Rugby Champions Cup (known as the Heineken Champions Cup for sponsorship reasons) is an annual rugby union tournament organised by European Professional Club Rugby (EPCR). It is the top-tier competition for clubs whose countries' national teams compete in the Six Nations Championship. Clubs qualify for the Heineken Champions Cup via their final positions in their respective national/regional leagues (English Premiership, French Top 14, and United Rugby Championship) or via winning the second-tier Challenge Cup; those that do not qualify are instead eligible to compete in the second-tier Challenge Cup.

Between 1995 and 2014, the equivalent competition was known as the Heineken Cup and was run by European Rugby Cup. Following disagreements between its shareholders over the structure and governance of the competition, it was taken over by EPCR and its name was changed to the European Rugby Champions Cup, without title sponsorship. Heineken returned as sponsor for the 2018–19 season, resulting in the competition being known as the Heineken Champions Cup.

Toulouse are the current holders of the title, having won their record setting fifth title by beating Stade Rochelais in the 2021 final.

The Heineken Cup was launched in the summer of 1995 on the initiative of the then Five Nations Committee to provide a new level of professional cross border competition. Twelve sides representing Ireland, Wales, Italy, Romania and France competed in four pools of three with the group winners going directly into the semi-finals. English and Scottish teams did not take part in the inaugural competition. From an inauspicious beginning in Romania, where Toulouse defeated Farul Constanţa 54–10 in front of a small crowd, the competition gathered momentum and crowds grew. Toulouse went on to become the first European cup winners, eventually beating Cardiff in extra time in front of a crowd of 21,800 at Cardiff Arms Park.

Clubs from England and Scotland joined the competition in 1996–97. European rugby was further expanded with the advent of the European Challenge Cup for teams that did not qualify for the Heineken Cup. The Heineken Cup now had 20 teams divided into four pools of five. Only Leicester and Brive reached the knock-out stages with 100 per cent records and ultimately made it to the final, Cardiff and Toulouse falling in the semi-finals. After 46 matches, Brive beat Leicester 28–9 in front of a crowd of 41,664 at Cardiff Arms Park, the match watched by an estimated television audience of 35 million in 86 countries.

The season 1997–98 saw the introduction of a home and away format in the pool games. The five pools of four teams, which guaranteed each team a minimum of six games, and the three quarter-final play-off matches all added up to a 70-match tournament. Brive reached the final again but were beaten late in the game by Bath with a penalty kick. Ironically, English clubs had decided to withdraw from the competition in a dispute over the way it was run.

Without English clubs, the 1998–99 tournament revolved around France, Italy and the Celtic nations. Sixteen teams took part in four pools of four. French clubs filled the top positions in three of the groups and for the fourth consecutive year a French club, in the shape of Colomiers from the Toulouse suburbs, reached the final. Despite this it was to be Ulster's year as they beat Toulouse (twice) and reigning French champions Stade Français on their way to the final at Lansdowne Road, Dublin. Ulster then carried home the trophy after a 21–6 win over Colomiers in front of a capacity 49,000 crowd.

English clubs returned in 1999–00. The pool stages were spread over three months to allow the competition to develop alongside the nations' own domestic competitions, and the knockout stages were scheduled to take the tournament into the early spring. For the first time clubs from four nations – England, Ireland, France and Wales – made it through to the semi-finals. Munster's defeat of Toulouse in Bordeaux ended France's record of having contested every final and Northampton Saints' victory over Llanelli made them the third English club to make it to the final. The competition was decided with a final between Munster and Northampton, with Northampton coming out on top by a single point to claim their first major honour.

England supplied two of the 2000–01 semi-finalists – Leicester Tigers and Gloucester – with Munster and French champions Stade Français also reaching the last four. Both semi-finals were close, Munster going down by a point 16–15 to Stade Français in Lille and the Tigers beating Gloucester 19–15 at Vicarage Road, Watford. The final, at Parc des Princes, Paris, attracted a crowd of 44,000 and the result was in the balance right up until the final whistle, but Leicester walked off 34–30 winners.

Munster reached the 2001–02 final with quarter-final and semi-final victories on French soil against Stade Français and Castres. Leicester pipped Llanelli in the last four, after the Scarlets had halted Leicester's 11-match Heineken Cup winning streak in the pool stages. A record crowd saw Leicester become the first side to successfully defend their title.

From 2002, the European Challenge Cup winner now automatically qualified for the Heineken Cup. Toulouse's victory over French rivals Perpignan in 2003 meant that they joined Leicester as the only teams to win the title twice. Toulouse saw a 19-point half-time lead whittled away as the Catalans staged a dramatic comeback in a match in which the strong wind and showers played a major role, but Toulouse survived to win.

In 2003–04 the Welsh Rugby Union (WRU) voted to create regions to play in the Celtic League and represent Wales in European competition. Henceforth, Wales entered regional sides rather than the club sides that had previously competed. English side London Wasps had earned their first final appearance by beating Munster 37–32 in a Dublin semi-final while Toulouse triumphed 19–11 in an all-French contest with Biarritz in a packed Stade Chaban-Delmas in Bordeaux. The 2004 final saw Wasps defeat defending champions Toulouse 27–20 at Twickenham to win the Heineken Cup for the first time. The match was widely hailed as one of the best finals. With extra time looming at 20–20, a late opportunist try by scrum half Rob Howley settled the contest.

The tenth Heineken Cup final saw the inaugural champions Toulouse battle with rising stars Stade Français when Murrayfield was the first Scottish venue to host the final. Fabien Galthié's Paris side led until two minutes from the end of normal time before Frédéric Michalak levelled the contest for Toulouse with his first penalty strike. He repeated this in the initial stages of extra time and then sealed his side's success with a superb opportunist drop-goal. Toulouse became the first team to win three Heineken Cup titles.

In 2006, Munster defeated Biarritz in the Millennium Stadium, Cardiff, 23–19. It was third time lucky for the Irish provincial side, who had previously been denied the ultimate prize twice by Northampton and Leicester.

The 2006–07 Heineken Cup would be distributed to over 100 countries following Pitch International's securing of the rights. That season was the first time in the history of the competition that two teams went unbeaten in pool play, with both Llanelli Scarlets and Biarritz doing so. Biarritz went into their final match at Northampton Saints with a chance to become the first team ever to score bonus-point wins in all their pool matches, but were only able to score two of the four tries needed. Leicester defeated Llanelli Scarlets to move into the final at Twickenham, with the possibility of winning a Treble of championships on the cards, having already won the Anglo-Welsh Cup and the English Premiership. However, Wasps won the final 25 points to 9 in front of a tournament record 81,076 fans.

During competition there was uncertainty over the future of the tournament after the 2006–07 season as French clubs had announced that they would not take part because of fixture congestion following the Rugby World Cup and an ongoing dispute between English clubs and the RFU. It was speculated that league two teams might compete the next season, the RFU saying "If this situation is not resolved, the RFU owes it to the sport to keep this competition going...We have spoken to our FDR clubs, and if they want to compete we will support them.". A subsequent meeting led to the announcement that the tournament would be played in 2007–08, with clubs from all the six nations. On 20 May it was announced that both French and English top-tier teams would be competing

In the 2008 final, Munster won the cup for their second time ever by beating Toulouse at the Millennium Stadium in Cardiff.

Leinster won the title in 2009 in their first ever final after beating Munster in the semi-final in front of a then world record Rugby Union club match attendance in Croke Park. They beat the Leicester Tigers in the final at Murrayfield Stadium in Edinburgh. They also beat Harlequins 6–5 in the quarter-finals at Twickenham Stoop, in the famous Bloodgate scandal.

In the 2010 final, Toulouse defeated Biarritz Olympique in the Stade de France to claim their fourth title, a Heineken Cup record.

The 16th Heineken Cup tournament in 2011 resulted in an Irish province lifting the title for the fourth time in six years as Leinster recorded their second triumph in the competition. They defeated former multiple Heineken Cup winners Leicester and Toulouse in the quarter- and semi-finals. At the Millennium Stadium in Cardiff, in front of 72,000 spectators, Leinster fought back from a 22–6 half-time deficit in the final against Northampton Saints, scoring 27 unanswered points in 26 second-half minutes, winning 33–22 in one of the tournament's greatest comebacks. Jonathan Sexton won the man-of-the-match award, having scored 28 of Leinster's points total, which included two tries, three conversions, and four penalties.

Leinster successfully defended their crown in 2012 at Twickenham, eclipsing fellow Irish province and former champions Ulster 42–14 to establish the highest Heineken Cup final winning margin. The performance broke a number of Heineken Cup Final records. Leinster became only the second team to win back-to-back titles, and the only team ever to win three championships in four years. In addition, the game had the highest attendance at a final (81,774), the highest number of tries (5) and points (42) scored by one team and the highest points difference (28).

The final edition of the tournament as constituted as the Heineken Cup was won for a second time by Toulon at the Millennium Stadium in Cardiff in May 2014.

The tournament began on 17 October 2014, with Harlequins playing Castres Olympique in the first ever Champions Cup game. Toulon retained their title, beating Clermont 24–18 in a repeat of the 2013 Heineken Cup Final, thereby becoming the first club to win three European titles in a row.

Following the November 2015 Paris attacks, all Round 1 games due to take place in France that weekend were called off, along with the Round 2 fixture between Stade Français and Munster. Rescheduling of some matches was difficult, partly caused by fixture congestion due to the 2015 Rugby World Cup.

Saracens won their first title defeating Racing 92 in Lyon 21–9 in 2016 final and followed it up with their second in 2017, beating Clermont 28–17 in Edinburgh.

Saracens won the 2018–19 competition, defeating defending champions Leinster 20–10 in the final. Saracens were in breach of the Premiership salary cap during this edition and the previous year, in which they qualified for the 2018–19 cup. However, the EPCR have confirmed that Premiership ruling will not affect the results of the Heineken Champions Cup for 2018–19 or previous years, stating: "The Saracens decision is based on Gallagher Premiership Rugby regulations and does not affect the club's European record or current status in the Heineken Champions Cup." There were no Saracens representatives at the launch of the 2019–20 competition, held in Cardiff on 6 November 2019. EPCR released a statement saying they were "disappointed to learn of Saracens' decision to make their club representatives unavailable for today's official 2019–20 season launch".